Have you ever wondered where the essential oils or aroma compounds that are used to compose fragrances, come from? Basically, from plants, from animals, from the sea, or from a laboratory. The most often used essential oils are Lemon, Sweet Orange, Patchouli, Rose, Mint (Mentha arvensis – wild mint – spearmint and peppermint), Aromatic litsea or may chang (“wild pepper”), Spice oils, Eucalyptus globulus, Cedarwood, and Clove. Specific regions of the world are famous for the perfume ingredients they produce. Once you find out what your precious bottle contains, you may well wonder where those ingredients came from and whether any of them are still natural. And, having found out which ones are natural, you could go a step further and wonder how they were sourced. Consider this for a moment: it is probably less harmful to the environment to create a perfume in a laboratory than to create it from plants or animals parts.

“The trend toward a minimalist aesthetic in fragrance can however be more harmful than it appears, particularly when it comes to flowers. The struggle major companies face is how to sustainably produce what is inherently an unsustainable product, especially as consumers demand more and more raw materials. ‘Flowers are very resource-intensive with low yield,” explains Torsten Kulke, senior vice president of global innovation & regulatory fragrances at Symrise who also published a scientific study on sustainability in fragrances in the July 2015 issue of Perfumer & Flavorist. Some 500kg (1,102lbs) of a flower, he noted, usually only yields 50 grams (1.1lbs) of essence. ‘Why do you want to waste hectares and hectares of productive land?’” (Alexandra Pechman, A sweeter choice: synthetic perfumes, while unpopular, are better for the planet, in The Guardian UK, 23 May 2016, rtrvd. 2018-12-05)

There are companies that produce essential oils in an environmentally responsible manner, such as Symrise, Givaudan, IFF and Firmenich. They produce synthetic ingredients that are so good at it you would never know the difference. (Unless you are an Organic Chemist who can decipher the labels on perfume bottles.)

In the meantime, back at the ranch, as the saying goes, the natural raw materials that make up fragrances (and all the other things they are used for, like food, pharmaceuticals, medicine, beauty products, aromatherapy, pesticides, agriculture, household cleaners, etc.) still have to come from somewhere. And here’s where some of them come from: 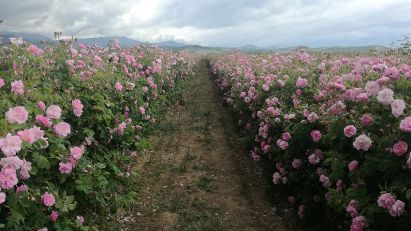 The Kazanlak rose grown for its oil-yielding petals is famous round the world and is one of the most recognizable national symbols of Bulgaria. 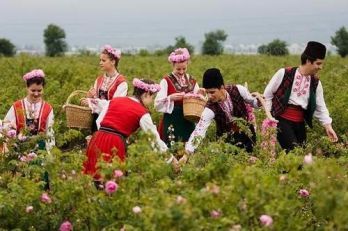 The annual Rose Festival in Kazanlak, 2017

If you think roses, think Middle East and Eastern Europe. Rosa damascena, the damask rose, is widely grown in Syria, Bulgaria, Turkey, Russia, Pakistan, India, Uzbekistan, Iran and China. Rosa centifolia, the cabbage rose, which is more commonly grown in Morocco, France and Egypt. The Rose Valley (Bulgarian: Розова долина, Rozova dolina) is a region in Bulgaria located just south of the Balkan Mountains, which contains the  Kalofer Valley of Roses. This valley is famous for its rose-growing industry which have been cultivated there for centuries, and which produces close to half (1.7 tonnes) of the world’s rose oil. The centre of the rose oil industry is Kazanlak. So, in Serge Lutens’ famous and evocative rose perfume, Sa Majesté la Rose, the essential rose oils come from Turkish, Bulgarian and Moroccan roses.

Though it is a common knowledge that Australia is full of Eucalyptus or blue gum trees, the largest producer of Eucalyptus essential oil is China. The leaves from the tree are steam-distilled to extract E. globulus oil. Originally Eucalyptus plantations were established for the wood, but later also for the essential oil by-product. China annually produces more than 2,000 ton of eucalypt oil. Eucalyptus trees are fast-growing and need lots of water, at the expense of other plants. On the plus side though, eucalyptus tree flowers produce a great abundance of nectar, providing food for many pollinators, including bees. However, it must be said that the vast Eucalyptus plantations that have been springing up in China have not been without controversy.

Oranges from Brazil for the production of sweet orange essential oils.

A Eucalyptus plantation in China.

When it comes to sweet orange essential oils, produced from the rind of the fruit and its varieties (often called D-limonene), Brazil’s tropical citrus-growing region of Bahia is famous for it. In 2014, 70.9 million tonnes of oranges were grown worldwide, with Brazil producing 24% of the world total followed by China and India.

“Orange oil is a by-product of the juice industry. Oil is cold-pressed from the peel of the fruit, after juice extraction and is widely used across the flavour and fragrance industry. Sweet orange (citrus sinensis) is around 90% d’limonene, a product used across many more industries. Approximately 40% of global oranges are processed for juice and oil with 60% solely used as a fresh fruit for consumption.” (Ultra International B.V., rtrvd. 2018-12-05)

The famous lavender fields of Provence.

Lavender is grown in England, but the Provence region in Southern France is particularly known for its fields of lavender that flourish in the dry, sunny, sandy soils of the interior.  From June to August you can walk or cycle the “lavender roads” in Provence, and no doubt the smell of the blooming lavender will tell you that you are there before you can see it.

A few weeks ago I was walking through downtown Vancouver, in the rain as usual, when my nose got a pleasant and very unusual smell: lavender – strong, fresh lavender. It came from a small street stall and they were selling bunches of dried lavender, lavender oil, and lavender and pomegranate-scented beauty products like soap. I asked the person manning the store, “Where does your lavender oil come from?” She could not answer, other than “France”, which is rather silly. (Might have been a language problem – in Vancouver Mandarin is more prevalent than French, and also she might not have been expecting a stranger to interrogate her about the provenance of her lavender oil!)

It turns out that the little bottles of lavender oil they were selling are produced by the Agnels family, on their farm in … yes, you guessed it, Provence. To be precise: Provence-Alpes-Côte d’Azur. There they have a distillery for lavender and other aromatic plants (“Les Angels – Distillerie de Lavande & Plantes Aromatiques”) where they produce various essential oils of various strengths and types. The website, only in French, explains (roughly translated by me):

“It is in 1895 that Mathieu Agnel began the harvesting of fine lavender on the hills around the hamlet of Agnels, in Apt, in Provence, in the heart of the natural park of Luberon, to distill it in a small alembic heat distillery. Since then, five generations have succeeded each other and this is how the reputation of our distillery, known and recognized for the quality of its products well beyond our region, has been forged.Today, we are perpetuating this tradition. We opened to the public our artisanal distillation process and we are able to share and communicate the love of our trade. Our family has passed on more than simply knowledge – also a passion for lavender and its distillation.”

Harvesting lavender on the Agnes farm. 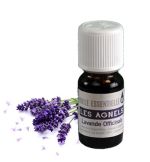 The small bottle of lavender oil of the type I bought at the street stall.

The owner in the plantation.

The little 10 ml bottle was mighty expensive but then it did come halfway round the world from France to the West Coast of Canada, and it is absolutely pure and the best quality. Even the tiniest drop or touch of it immediately floods your senses. It smells of purest sunshine, warm earth, a bit sage-like, a bit balsamic, sweet but not overpowering. You know, like a spa or your Grandma’s house. The next time your nose picks up on something delectable, ask a few questions and find out what’s in the fragrance and where the main ingredients come from. You might get intriguing answers.